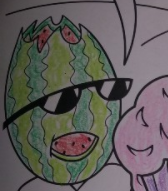 This thrilling glimpse at three days in the lives of J. and Pinky Slice, published by the National Watermelon Promotion board, may in fact be fun coloring for healthy kids, or healthy coloring for fun kids, but it left this reviewer with more questions than it answered.

The plot centers around J. Slice’s friend Clarissa who, high on the power of being the birthday girl, eats too many cupcakes, bringing disaster to her party and putting her friends, and presents, in danger. The consequences of her actions are foreshadowed early in the nine page epic when Pinky tells us that *she* will make sure to only eat one cupcakes because, “Just like mom says- you are what you eat.”

This cliche advice might be passed over as just bad writing, but the colorer quickly realizes that, in this universe, it’s more than just a trite attempt to moralize people’s eating habits by warning them that they will absorb some of the larger social meanings of the foods they consume… there are very real consequences to eating too much of one thing here. And thus we reach the central conflict in this story, Clarissa is being immoderate, and there will be consequences:

Clarissa is eating too many cupcakes. Something bad is going to happen. — Pinky (pg 4)

Before J. Slice can skate in and save her from her gluttony, Clarissa transforms into a Super Sugar Villain, and starts to terrorize her friends by offering them seconds on cupcakes.

At this point I was made deeply uncomfortable by the implications of the rules of this universe. Until now the human-watermelon form of Pinky and J. Slice had just seemed like an attempt to personify the cool, refreshing, go anywhere-ness of watermelon, and little examination of their origin was needed. I can suspend my disbelief with the best of them. If J.slice is half watermelon, so be it. But the plot centering on the transformative risks of eating too much of one food forces the colorer to uncomfortably ponder the Slices as, page after page, we bring their melon heads to life.

Were they once humans too?

One can’t help but notice as they color the “S” on J’s shirt, that Pinky has no body at all… is she further gone than him? One becomes aware that the other friends at the party never even have feet. They are but vacant eyes and arms stuck on realistic representations of the foods they must have once over consumed. The struggle to save Clarissa suddenly takes on an urgency. If they can’t get her to stop eating cupcakes, this transformation will be permanent.

Fully invested now, the colorer races through the pages, eager to find out how J. Slice will keep Clarissa from continuing to eat cupcakes. He rationalizes with her:

Stop this Clarissa. You’re not Princess Cupcake! You’ve had too much sugar!

but his words fall meaninglessly on her earless, cupcake head.

“Here, have a cupcake”

She can’t help herself…

One worries it’s too late. How will J. Slice save her?

The last cupcake colored, one flips the page eager to see what the Slices do next and reads:

The story completely skips over the *only* thing promised in it’s verbose title. How does J. Slice save Clarissa? What’s involved in saving someone, is it graphic, hard to draw? We’ll never know.

But here’s something I do know, as I struggle to finish the last of the 70% by weight yield of fruit from the watermelon I bought last week, as it suffers a “loss of flavor and texture” from too long in cold storage; I’m uncomfortable with this story.

On the last page our heroes are back to their normal lives, which for J. and Pinky involves trying to convince people not just to avoid too many cupcakes, but to eat more watermelon. They are ironically unaware that their own monstrous human-melon hybrid form seems to have been caused by a past overindulgence, and a present inability to come off it.

Watermelon marketing, generally, is defensive about the sugar content of watermelon, regularly pointing out that it *also* has minerals, and sooo much water (It’s right in the name!) In a post Atkins world, one can understand the identity crisis watermelon must have suffered when we all got scared of carbs, and perhaps that’s the key to understanding the real moral, subversive though it might be for a produce focused commodity checkoff program: no food is good in excess, and no food is universally bad. Variety and moderation are key. And while J. and Pinky are stuck in a pre-Atkins world of rollerblades and loud shorts, we the colorers, are not.

This is about more than melon. This is a cautionary tale about not exclusively consuming just one thing, lest you become that thing embodied, cursed forever to spend your life trying to get others to join you. This promotional coloring book can’t show us what it looks like to save someone from that, because we, as humans, don’t yet know.

Scroll back to top